Yesterday was such a hot and nasty day that standing in place for more than thirty seconds, I was drenched in sweat. I wasn’t the only one braving the heat though! My beautiful wife Haley was standing next to me the entire time. So was mother-in-law Lora, my Grandma Linda and Grandpa Steve, my Grandma Joan and Grandpa Dave, and my cousins, Cae and Lainey – all of them braving the heat and getting drenched in sweat right next to me… with me… But it wasn’t just us! There were hundreds of beautiful people of all backgrounds, colors, creeds and beliefs braving the heat drenched in sweat. Rockfordians coming together to protest the injustice and cruelty that has been occurring with families being separated at the border. We stood together peacefully protesting making our voices heard. Our city police helped us get from our starting point at City Hall to our ending point at the courthouse. So even though yesterday was such a sweltering day, it was also such a beautiful day because I was able to march alongside my Rockford brothers and sisters united! 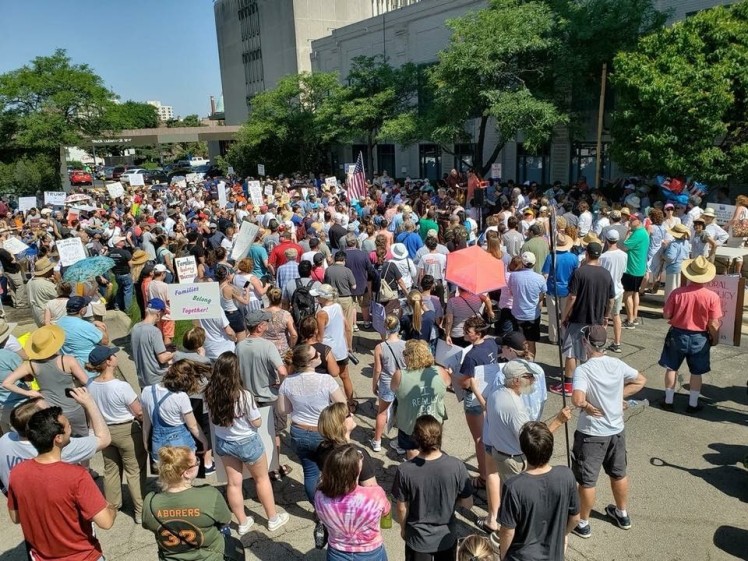 I couldn’t count the number of people that were at the march. Our local newspaper, the RRStar estimated that there were just under 1,000 people in attendance, while others in attendance think that were over 1,000. Regardless of the number, an excellent group of people showed. Rockford is a city with many beliefs, personalities, and opinions. This morning, I logged in to Facebook to check the articles from the various news stations. Then, I made the mistake I have told myself on multiple occasions not to do—I read the comments. The uplifting feeling of unity I felt being surrounded by my fellow Rockfordians yesterday slowly started slipping away and that feeling was being replaced by anger, sadness, and the worst word anyone can use…. HATE.

Scrolling down the threads of negative and hateful comments I felt more and more angry. Of course, there weren’t ONLY negative comments, but they sure as hell were overpowering. I got to a point where I just had to stop reading such hateful words. At that moment, the community that I was so proud of being a part of yesterday was beginning to dissipate.

I got out of Facebook to check my Instagram, and the Instastories saved my day. Haley took some pictures of the march, our signs, but what was so cool was to see Cae and Lainey—the excitement and joy in their faces. This was the first time they had marched for a cause. Their choice to stand up to the injustice was really inspiring. They showed such passion and bravery and it reminded me of how I felt standing in the crowd with my fellow Rockfordians.

Let’s continue to teach our youth to be like our young cousins—to fight proudly for those that don’t have a voice. Let’s stand up for those that can’t. Let’s not let the haters and naysayers on social media ruin our day because it’s just not worth it when there are so many GOOD people in our community.